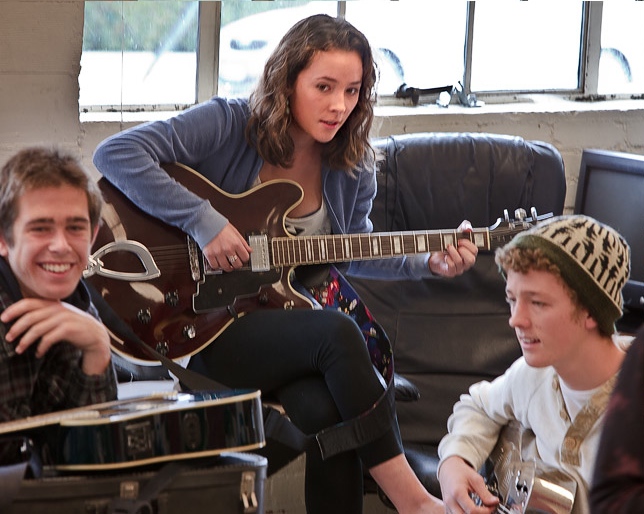 Blues For Youth is an educational outreach program of the Santa Barbara Blues Society to bring an appreciation of blues music and it’s history to the next generation.  Starting in 2005, our programs are presented by nationally recognized music educators and are provided free to local schools.  Our events have been showcased by the local television and print media, and are made possible by generous grants and contributions from local foundations and companies such as Fender, Gibson, and National Resophonic.

Many thanks to the Santa Barbara Bowl Foundation for recent grant funding that will enable us to continue our youth outreach program!

For more information or to get involved in this very worthwhile program, call the Santa Barbara Blues Society at (805) 722-8155 or send an email to info@SBBlues.org.

Browse the tabs below to view ongoing and past programs.

History of the Blues: An Original African American Artform – February 2017

In honor of Black History Month, the Santa Barbara Blues Society partnered with local guitarist Kenny Sultan and the youth music organization Notes for Notes to present: “A History of the Blues”. This multi-media extravaganza featured a PowerPoint presentation and the Notes for Notes Santa Barbara East band Jazz Villains performing historical selections of Blues, Spiritual, and Jazz Music taking the listeners on a journey from the Slave Trade to the British Invasion and beyond.

The fifth graders at Cleveland Elementary have just finished performing at a school assembly, the culmination of the Santa Barbara Blues Society’s Blues for Youth program. While the boys spill across the auditorium floor to roughhouse, the girls form a circle around Valerie Johnson to ask if she is married to Al B. Blue, the partner with whom she has given the students a seven-week crash course in blues music. As word ripples around the crowd of girls that indeed the two are married, one sighs, pirouettes, and falls on her back.

That Johnson and Blue (who refuses to share the name his mother gave him) have so strongly endeared themselves to the kids in six 45-minute sessions is almost as impressive as the fact that they actually taught them how to sing and play blues music.

They downplay the accomplishment, however. “Kids are sponges,” says Al. “If you don’t tell kids something is hard, they just do it,” adds Johnson.

The Santa Barbara Blues Society — whose members love to point out that, founded 1977, it is the oldest in the country — first won grants to do educational outreach in 2005 which have since been bolstered by matching funds from the Santa Barbara Bowl.

Johnson and Blue, along with Cleveland’s teachers, tied the blues lessons into the fifth grade U.S. History curriculum on slavery. “I date the blues to when the slaves were stolen from their villages and sold on the auction block,” Johnson says. She explains that the call-and-response format central to African-American music and religion began with a “field holler” when new slaves, who did not share a common language, would call out to each other with guttural sounds to express their pain and sorrow.

The Cleveland students read aloud a short play about the history of Harriet Tubman before they performed a song about Tubman to the tune of Lady Gaga’s “Born This Way.” (Yes, Tubman was “born a slave.”) Building on the theme of the Underground Railroad, they also sang a medley of spirituals made up of “Run Mary Run,” “Way Over in Beulah Land,” and “Wade in the Water.” Johnson explained to her audience—the rest of the school’s students—that Beulah Land represents freedom and that when slaves directed runaways to enter a body of water, it was so that they could hide their scent from hunting dogs.

Al B. Blue played lead guitar on his cream-colored Fender Stratocaster throughout, but he was accompanied by students on lap steels, guitars, washboards, a drum made out of an old cheese roll and homemade diddley bows fashioned out of two-by-fours and decorated with stickers.

Blue and Johnson, Nipomo residents, both sport impressive resumes as performance musicians, but they’ve been working with kids all over the country for 15 years. Johnson says that, even though blues might not be the most popular genre on the radio, kids can dig on it because, “Blues is about how life is, not how you want it to be.” In fact it’s so much about real life, says Blues for Youth Coordinator Rosemarie Keller, that it’s sometimes hard to find songs with appropriate lyrics for young children.

Hawkeye Herman was called “One of America’s finest acoustic guitarists and blues educators” by the Cascade Blues Association. He is a recipient of the prestigious “Keeping the Blues Alive” Award for achievement in education from the Memphis based Blues Foundation in Memphis. Herman’s dynamic performances have won him a faithful following, and he leads a very active touring schedule of concerts, school programs and workshops in the United States and abroad.

2008 marks Hawkeye’s 30th year of “Blues in the Schools” programs. He began this effort long before most blues support organizations and festivals even existed. Since that time he has helped to initiate educational programs for many blues societies and has single-handedly introduced blues music workshops and children’s programs to major festivals. In the past 30 years Hawkeye has presented his Blues In The Schools programs in over 500 schools, in 22 states, five nations, and to over 1/2 million students.

During the week of March 12, 2007, the award-winning acoustic blues soloist and educator, Fruteland Jackson, traveled from Chicago to teach Santa Barbara students about the historical roots, evolution, and diverse sounds of the Blues. Calling his program Blues 101, Fruteland took students on a cultural and musical journey from the pre Civil War era to today. The one-hour program effectively integrated storytelling, singing, guitar playing, student performances, and a question-and-answer session.

Over 1700 students in ten public and independent schools were served. Students ranged from 4th and 5th graders, to middle and high school students, to university undergraduates. One highlight of the week was an interview Fruteland gave on the local public radio station. Another was an intimate concert he gave in a board member’s home.

We wish to thank the following for their generosity in making it possible to bring Fruteland to our community. They are:

Magic Slim and the Teardrops appeard on December 3rd, 2005 for the SBBS at Warren Hall (Earl Warren Showgrounds). Below is an image of some of our Blues For Youth students meeting backstage with Slim. 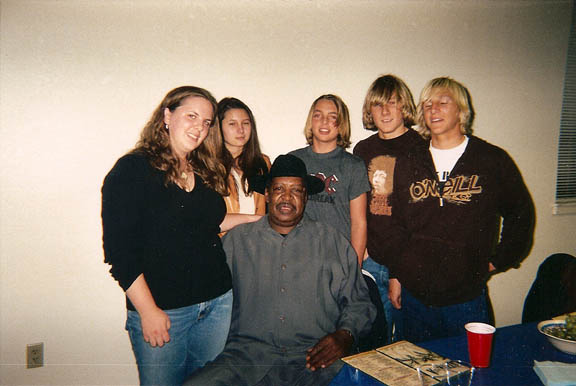 This program is based on the California State Board of Education’s Content Standards. A local musician/educator delivers it. The program has three components. It begins with live and recorded blues music so that students can get a feel for the genre. Then, poster-size maps and photographs are used to teach students about the historical, social and geographical roots of the Blues. During the third component of the program, students write their own blues lyrics, which are sung by our musician.

This program is being underwritten by raffling the BB King Epiphone that was donated by the Gibson Foundation specifically for our Blues For Youth classroom program.

Without question, the highlight of Blues Bash occurred when Elvin Bishop brought one of the student volunteers on stage and had her strum his guitar while he did the finger work.

After the Blues Bash ended, students spent additional time with the artists.

The SBBS partnered with Cate School to sponsor an afternoon workshop for local high school musicians that was led by Los Angeles-based blues artists. Students and artists also shared dinner together. The day ended with an evening concert during which both the professional artists and students played.

Zack Slovinsky (aka Cadillac Zack), a professional blues guitarist, joined with the SBBS-Cate partnership and assembled a band featuring Mississippi Bo and two additional LA blues musicians. After students received an introduction to the Blues from Zack, the artists and students then divided into instrument groups for two hours of one-on-one instruction.

After a private dinner, the group walked to Cate’s theater where students and faculty awaited them. Cadillac Zack and his crew played deep-South electric blues songs. The concert ended with Zack bringing to the stage those student-musicians who had excelled during the afternoon workshop. The opportunity to perform with Zack in front of their friends and teachers was an exciting experience.